As part of our commitment to raising the standards of meat for our customers, butchers and meat wholesalers, and ultimately for the wider community of East Anglia and beyond, the annual HG Blake Charity Christmas Beef Show took place on Friday, 2nd December 2016.

63 carcases were entered by 23 different producers and judged by Adrian Crowe of MLC Services. The best 20 carcases were then displayed and auctioned off to bidding butchers by Graham Ellis of Stanford’s Auctioneers.

We would like to extend our congratulations to the three main winners of the evening:

SUPREME CHAMPION was awarded to 26-year-old Tom Seaman of Suton, Wymondham, for his 327.5kg Limousin X, which was bought by Priors of West Lynn for 6.55 pence per kilo. 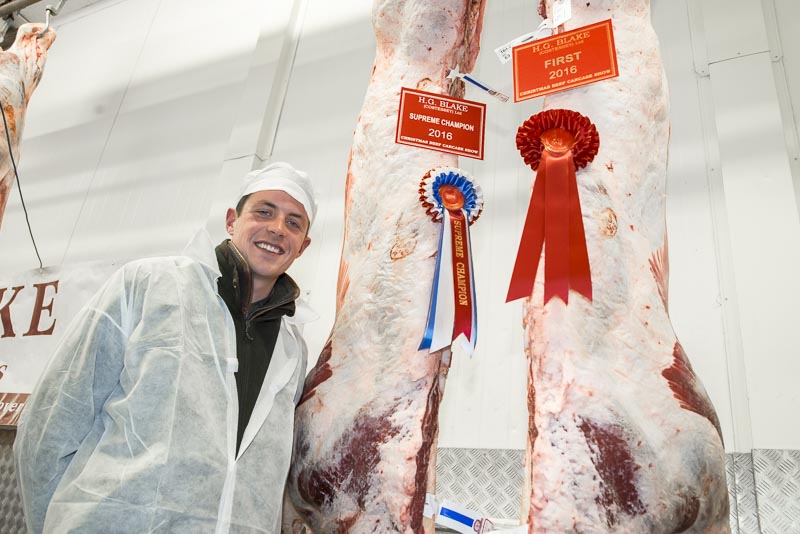 RESERVE CHAMPION was awarded to Roger Balls of Potter Heigham, for his 353kg Limousin X, which was bought by Terrys Butchers for £4.65 pence per kilo.

BEST EXHIBITOR BRED CARCASE was awarded to Mr T.H & L. Caldicott of X for his 385kg Limousin, which was bought by M&D Butchers for £5.05 pence per kilo.

The charity auction included a pig carcase (donated by Richard Lilwall); a prime Norfolk lamb (donated by Alan Peck), a magnum of Champagne (donated by Alf Rudham); a gentleman’s leather travel bag (donated by Mr & Mrs Charlie Mills); a keg of Award Winning ‘Pickled Pig’ cider (donated by Mr C Roberts), and tickets for dinner and evenings racing at Great Yarmouth Greyhound stadium (donated by Yarmouth Stadium), to name but a few of the items that raised £2,500 for the East Anglian Air Ambulance.

Delicious roast beef sandwiches, expertly cooked by Richard Lilwall, along with traditional mince pies handmade by Daphne and Charlie Clarke of Clarkes Butchery and Farm Kitchen (Hevingham), and mulled wine made by Mrs Blake, were served throughout the evening.

“I say it every year, but the standard is getting higher and higher. There are more E-grade carcases’ at this show than I see in an entire year, and I see a lot of carcases!”

Asked what he looks for when judging a carcase, he replied: “It’s essentially a butchery carcase competition so I’m looking at carcase size, fat covering and carcase utilisation. The confirmation of Tom Seaman’s Limousin X is top of the class (E grade).  Very rounded. Size of the carcase is perfect – not too fat, not too lean. There’s an even fat covering. You can see the blue coming through, which is the lean. On the brisket you can also see the lean, and the carcase is nicely rounded. Again, it’s all about proportions. When the carcase is broken up there will be full carcase utilisation; with the exception of the skeleton, everything will get used, which is very important. The joints will be easily saleable for the butchers.”

Asked what the secret of his success is, Supreme Champion, Tom Seaman said:

“I have grown up around cattle all my life and was taught what I know by my grandfather, and stuck to his traditional methods. I am proud to have got to where I am now. And to have won the HG Blake Supreme Champion is the best thing I’ve ever done. It’s a great achievement!”

It’s a real achievement, especially for a twenty six (26) year old. Can you give us an idea of what goes into producing a Supreme Champion?

“Yes, sure. I bought her around May 2015. I had her inside for most of the time, feeding her, looking after her, and she came on really well.  I stuck to our traditional system. I didn’t treat her anything differently from my other cattle, so to think she was chosen as Supreme Champion is really special.”

“It’s been another great turn out for the Show and I would like to extend my thanks to those that attended and to all my team who have worked tirelessly to make it another memorable occasion. I would like to congratulate Tom Seaman on being a worthy Supreme Champion, and to recognise Mr Caldicott’s efforts in winning the Best Exhibitor Bred Carcase. To have bred, reared and fattened an animal all the way through is an achievement in itself, but to this standard, well, hats off to him!”

“It was another good occasion. The beef exhibited is incredible. We at HG Blake are all very proud of Tom Seaman’s achievements in winning the Supreme Champion. It’s wonderful to see someone from a younger generation win and I hope it will encourage more to enter in the years to come. I would like to thank all the HG Blake staff, who I consider extended family, for all their efforts not just at this event but for their commitment throughout the year. Merry Christmas to all.”

About the Author: HG Blake